The State Street Miracles will be performing at DiFabio’s from 12-12:30p. 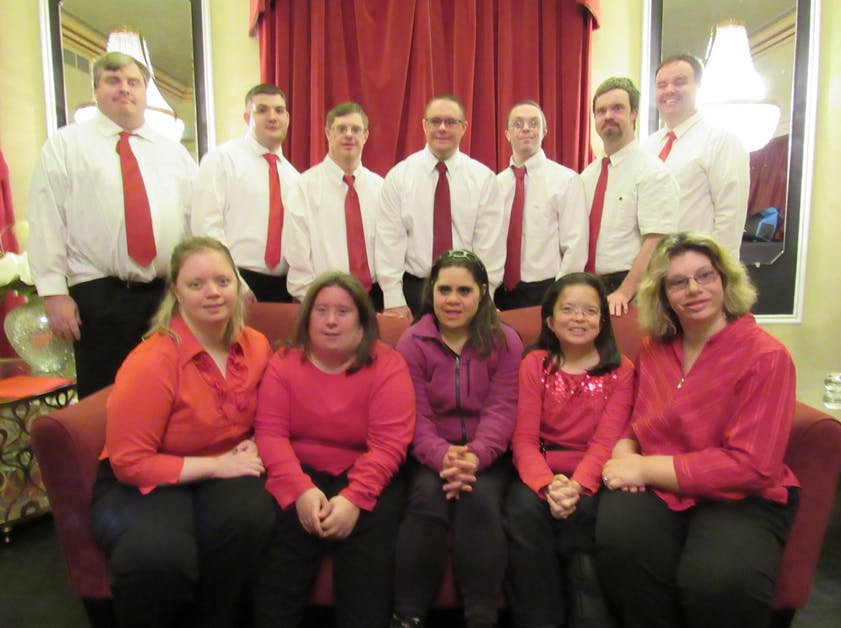 Miracles Happen at the Media Theatre

State Street Miracles are ambassadors in song for people with disabilities

They are talented, enthusiastic and joyful. They are the Media Theatre State Street Miracles, a performance troupe of adults with intellectual disabilities – and many abilities.

While all of Media Theater’s musicals, concerts, classes and special events are wonderfully entertaining, the theater breaks down barriers for people with intellectual disabilities when they hold special rehearsals for the Miracles on Monday evenings.

The Media Theatre State Street Miracles have a mission to spread the joy of music and dance while increasing awareness of the talents and abilities of people with disabilities.

They are now marking their 11th year of performing. The troupe has grown from eight to 14 performers, they’ve learned the music, lyrics and choreography for 14 songs from classic musicals to pop and rock, and they’ve played to audiences from Harrisburg to Washington, D.C.

The Miracles are ambassadors in song who use their vocal and dance talents to show that people with disabilities have many abilities. Their performances are professional, yet spontaneous as the Miracles introduce themselves and perform a repertoire of songs from show tunes to modern hits including the Journey song, “Don’t Stop Believin’.”

Wherever they perform, smiles instantly appear on people’s faces as they are inspired and entertained by their lively dancing and singing.

Since they were organized in September, 2006, the State Street Miracles have earned standing ovations for many performances, including concerts at the Rose Tree Summer Festival, the Pennsylvania Special Olympics Fall Festival at Villanova University. They’ve also traveled to Harrisburg where they were recognized by the state Senate and performed in the Rotunda, and to Washington, D.C., where they performed in the Senate Rotunda.

The troupe, which is sponsored by the Media Theatre, features 14 adults who have various developmental disabilities from autism to Down syndrome, but love to sing, dance and perform. The emphasis at Monday night rehearsals goes beyond performing.

Since they joined the group, all members have experienced improved speech and articulation, better independence and decision-making, increased self-esteem, and most importantly, they’ve formed friendships with their fellow performers, the Media Theater staff, and members of the overall community.

Their repertoire includes a rousing rendition of “God Bless America,” a meaningful version of “Getting to Know You,” their theme song, and a hip-shaking version of Elvis Presley’s “Hound Dog.” The group enjoys singing “Lean On Me,” which communicates an inspiring message of support for each other.

Their message is also embraced in “That’s What Friends are For,” “Sing A Song” and “We Are the World.”

The mission of the State Street Miracles is to provide people with disabilities an outlet to express their musical and artistic talent while raising awareness in the community of the creative abilities of people who have a developmental disability.

While people with disabilities are more included today in the school and work environment, there are still many barriers preventing them from participating in the arts community. The Media Theatre, a professional music theater, provides a bridge to performance opportunities.